The Euro NCAP tests are one of the main indicators of the durability and safety of new models and carmakers know it. It has happened in the past that a vehicle has failed these tests, which certainly doesn’t help sales. Today, however, a significant part of the rating is made up of active safety, i.e. electronic watchdogs and driving assistants, so getting less than three stars is frowned upon.

But that’s not the case with the most recently tested models, which are the Ford Mustang Mach-E, Hyundai Ioniq 5 and Tucson, and Toyota Yaris Cross. In fact, all of these cars reached five stars, the highest mark. Just below them, scoring four stars, was the new Hyundai Bayon small crossover. Interestingly, two of the “five-star” models run on electricity.

Let’s start with the Ford Mustang Mach-E electric SUV-coupe. The new car, which takes its name from the legendary Ford Mustang muscle car, is considerably better than that muscle car – the one with the five-liter V-8 engine only got a three-star rating.

The second tested electric car was a new product from the South Korean carmaker Hyundai, namely the crossover Ioniq 5.

For example, in the driving safety assistant test, the car scored 88% of the points, with practically every category losing no more than half a point. Children are protected by the car at 88 per cent. In a collision with a pedestrian, the Ioniq 5 scored 63 per cent, which was still enough to earn five stars.

Large SUVs traditionally perform very well in Euro NCAP tests, a result confirmed by the latest Hyundai Tucson, a car that has attracted attention since its introduction thanks to its unconventional design. But it’s already clear that the car is not only good-looking, but also safe. It scored highly in occupant protection, scoring 86 per cent and 87 per cent for children. The car has therefore been awarded five stars.

Only four stars were awarded to the last Hyundai Bayon tested. Euro NCAP writes that it performed well in crash tests, for example, and for a small crossover, such a result is impressive.

The new Toyota Yaris Cross crossover, which is based on the platform of the classic Yaris, has been tested both in Europe and in Australia, where its safety was the focus of sister company ANCAP. And on both continents, the Yaris Cross proved to be a very safe car, also scoring five stars.

Of all the models last tested, the Japanese crossover scored the most balanced results. It protects adult occupants at 86 per cent, children at 84 per cent and pedestrians at 78 per cent. The car did not fall behind in terms of driving assist functionality, with a score of 81 per cent. 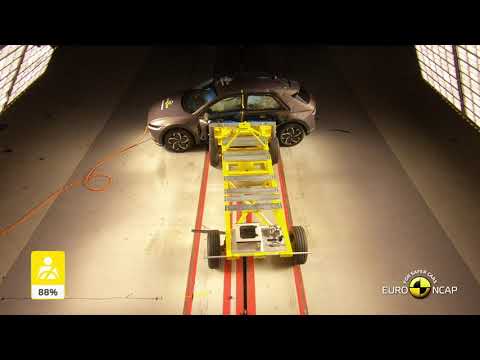 We will be happy to hear your thoughts

As an Amazon Associate Thecarstuff.com earns from qualifying purchases.

We use cookies on our website to give you the most relevant experience by remembering your preferences and repeat visits. By clicking “Accept All”, you consent to the use of ALL the cookies. However, you may visit "Cookie Settings" to provide a controlled consent.
Cookie SettingsAccept All
Manage consent

This website uses cookies to improve your experience while you navigate through the website. Out of these, the cookies that are categorized as necessary are stored on your browser as they are essential for the working of basic functionalities of the website. We also use third-party cookies that help us analyze and understand how you use this website. These cookies will be stored in your browser only with your consent. You also have the option to opt-out of these cookies. But opting out of some of these cookies may affect your browsing experience.
Necessary Always Enabled
Necessary cookies are absolutely essential for the website to function properly. These cookies ensure basic functionalities and security features of the website, anonymously.
Functional
Functional cookies help to perform certain functionalities like sharing the content of the website on social media platforms, collect feedbacks, and other third-party features.
Performance
Performance cookies are used to understand and analyze the key performance indexes of the website which helps in delivering a better user experience for the visitors.
Analytics
Analytical cookies are used to understand how visitors interact with the website. These cookies help provide information on metrics the number of visitors, bounce rate, traffic source, etc.
Advertisement
Advertisement cookies are used to provide visitors with relevant ads and marketing campaigns. These cookies track visitors across websites and collect information to provide customized ads.
Others
Other uncategorized cookies are those that are being analyzed and have not been classified into a category as yet.
SAVE & ACCEPT